The Results of Rachel's Salsa

Last week I went to three different locations to get the ingredients for Rachel's Salsa. One was a Farmers Market, the other two were local produce stands from local farms. Buying local, especially during the summer, is important to me. I want to support Utah farmers and help to build the economy here. Plus, it just tastes better. And I do this even though I have my own garden. Some things I don't bother growing because I don't have the space, and because I know that other gardeners do it better. 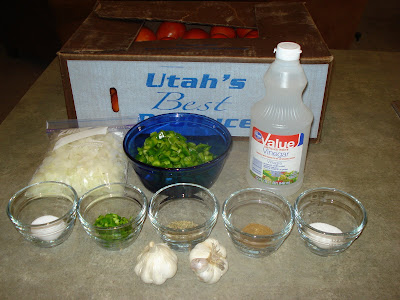 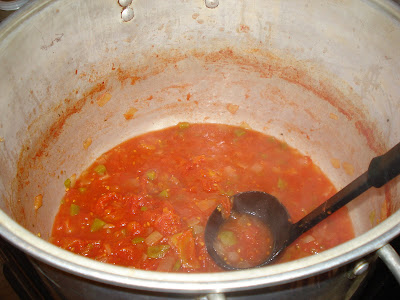 We first blanched and peeled the tomatoes, then cut them up and threw them in the pot. Then we added all of the other stuff and let it simmer for a couple of hours. It cooked down to a manageable chunkiness, so we started filling jelly jars with the salsa. This recipe doesn't require processing. The jelly jars were sterilized in the dishwasher and then the lids were heated and sterilized before sticking them on the jars and screwing them on tightly. Then we put the jars under a towel and waited for the tell-tale pop to tell us that the jars had sealed themselves. 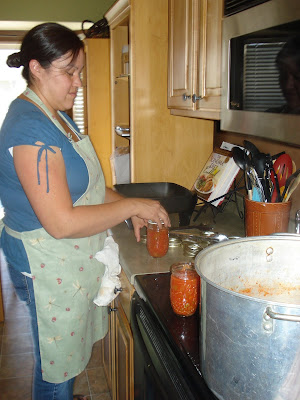 Here is Cousin Rachel putting the lids on the jars. She is amazing at this sort of stuff. 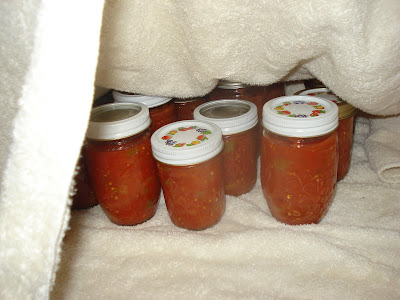 24 jelly jars peeking out from under the towel. I have heard little pops throughout the day and hopefully in the morning I will put them all down in my food storage to use throughout the year.
Posted by Heidi Totten

Email ThisBlogThis!Share to TwitterShare to FacebookShare to Pinterest
Labels: Fridays on the Farm, Recipes that work