Marriage: Before it Begins 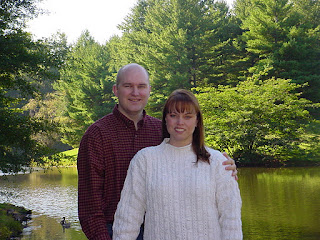 These are my experiences with marriage and mine alone.  I don't claim to be an expert on marriage, because I don't think it is possible, even if you have been married 60 years.  I have been married for 9 years and every year of that marriage has been different and brought new challenges and triumphs.  There are 8766  hours in a year.  On average, my husband and I probably spend about 2-3 hours a day interacting with each other in some aspect (which is probably more than most couples).  That could include making breakfast and getting the kids ready for school (about an hour), making dinner and eating it (about an hour), and doing the bedtime routine with the kids.  If he makes it past a 9pm bedtime, then we may spend a little more time together.  However, he gets up at 4:30am so that he can run around the neighborhood and I am a night owl.
They say it takes about 10,000 hours of doing something to make you an expert.  If that is the case and we have spent 9 years together, then we are closing in on the 10,000 hours spent together mark.  We may have hit it when you include date nights and vacations.  I think I am getting close to becoming an expert on being married to my husband and I think I know how to help him be happy.  I can't say make him happy because now I am old enough to know that no one can "make" you happy other than you.  That is another post for another time.
When I got engaged at the ripe old age of 30 after dating my now husband for two weeks, I thought that maybe the odds were stacked against us.  I had recently and very slowly worked my way out of an on-again-off-again relationship and the thought crossed my mind (and I am sure everyone else's) that my husband was a rebound thing.  What I realize now looking back, is that were it not for the on-again-off-again relationship, I wouldn't have seen in my husband the qualities that were exactly what I was looking for.  I have talked with many friends over the years about what they are/were looking for in a relationship.  I have had some favorites that I thought were ridiculous that I would like to share.
1.  He has to be handy.  None of the guys I know are handy, or at least they don't show it.  (Most of the guys she knew lived in apartments and were renting.)
2.  He has to wear a suit and tie to work.
3.  He has to like chick flicks.
4.  He has to know how to change the oil in the car.
Now, I will also say that on the flip side I knew some guys that were looking for ridiculous qualifications as well.  I went on a few dates with a guy that clearly loved his dog.  His dog that he bought with his former fiance right before she dumped him and ran off with another man to Chicago (you can't make this up.)  When he made it clear to me that should we get married the dog would sleep in the same bed with us, I felt compelled to make it clear that I don't share my sleeping space with animals.  He was stunned and horrified.  I also went out on a blind date that was stunned and horrified that I wasn't a vegetarian (I guess he got the last laugh on that one.)
When I met my now husband we made little impression on each other.  It was not love at first sight.  It wasn't even friendship at first sight.  In fact, we can't totally agree on when we first met.  The impression came later - six months later in fact, after a life-changing six month period for me.  What I noticed was the following:
1.  He was conscientious of serving others.  He, along with his best friend, made an effort to serve wherever and whenever they could.  That included helping people move (which is when I noticed this about him), working at the temple every Saturday, and performing lipsyncs to songs to support a ward activity.  After being around men for years who weren't service oriented, it was a refreshing change.
2.  He was funny in a quiet way.  He didn't need or want to be the life of the party.  He had a sense of humor and laughed at funny things.
3.  He was honest.  When he told me he liked me and wanted to date me, he also told me that he didn't know if that meant exclusively dating, yet.  He just knew he wanted to spend time with me.  The fact that we were engaged 12 days later is irrelevant.
4.  I DID NOT HAVE TO STALK HIM.  I didn't have to plan movie nights, dinners, group whatevers.  All around me my female friends were taking the responsibility for dating right out of the hands of the boys they liked.  The guys we knew didn't have to ask anyone out because their social lives were already planned out months in advance by the girls that liked them.  (I don't think this happens as often outside of the LDS culture.)
5.  At the time that I met him and the time he met me, we had our heads on straight.  Neither one of us needed to "fix" the other person because we were both working on fixing ourselves.  That made for an equal partnership.
And honestly - it was a lot of luck that I found him.  .  If 50% of marriages end in divorce anyway, then getting married to begin with is kind of a crap shoot.  It's hard work and it's wonderful and it's tiring and it's amazing.  But that is the way life is regardless of your marital status.  The number one thing that I realized was that I was happy being single and I am happy being married.  And that's about all I can ask for.

For more resources that will help you on your road to a strong marriage and family, please check out my Strengthening Families page.
Posted by Heidi Totten