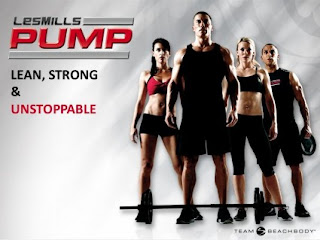 Les Mills Pump
I will admit it, I really am not a fan of walking either on a treadmill or outside.  It is too passive for me.  Running is too monotonous.  I am all about choreography and roundhouse kicks.  I've been a fan of the roundhouse since Billy Blanks introduced me to it in his Taebo VHS tapes.  Speaking of roundhouse kicks, this was my Facebook status Monday night:
"I would totally be a female Ethan Hunt except for the whole heights thing. And running. Climbing buildings. I might struggle with codes. But the roundhouse kick - I would so rock that."
Back in about 1999 when I discovered Taebo (and from there my love for kickboxing style workouts) I also signed up to take a Weight Training class at NOVA Community College in Annandale, Virginia.  It was a ridiculous class because it was 3 hours straight, two times a week.  Who can lift weights 3 hours straight?  Well, maybe Ethan Hunt, but I digress.  Anyway, some of it was education and some of it was running and squats and all that, but a lot of it was heavy lifting.  I was doing that twice a week and Taebo every day and by the end of those six weeks I was a rockstar.  I could also run a couple of miles straight (remember - not a runner).
So, in a nutshell, one of the things that Chalene Johnson talks about in her book PUSH is finding your soulmate workout - the one that you love and that you actually are excited to do.  Today I could hardly wait for my bestie to get here so that we could do Fire45 and Stretch10.  Of course, I have renewed excitement over it because of working out with Chalene, but still - it's my soulmate workout.
What's yours?  I mean, what would get you up at 5am to workout if that was the only time you could do it?

You might find it here....
Posted by Heidi Totten