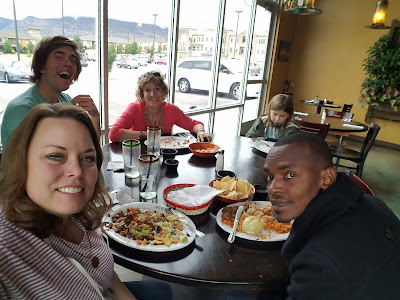 A few months ago, I went to my second LifeStory Transformation Certification workshop. I was certified a year ago, but wanted to actually go through the process again. It was a really fun day, just made better because we got to go to lunch at Milagros. Milagros means miracles, and that is one of my favorite words.

I've done so many different programs around manifesting that I should win an award. Is there an award? If so, I should definitely win it. I've read all of the books and sat in workshops. I've taught workshops. I've been certified in a lot of different programs. I could go around and around about this. Some are more comprehensive than others. Some are a lot more labor intensive and sluggish. So when I was introduced to LifeStory Transformation, I figured there wouldn't be much of a difference. Except, there was.

For one thing, it is SO MUCH FASTER than any other program I have done. I may be bold in saying this, but I think that the planet is shifting in consciousness, and that old ways of manifesting just take too long. They require too many steps, and my experience with this, is that the more steps there are, the less likely anyone is to do it.

The way I look at LifeStory Transformation, and the way I implement it is very different. I do it in 3 segments. I start with Creation, then move on to Planting Seeds, and then everything else is very organic and I expand when I see the Sprouts. Does that sound confusing? It's actually the most simple method I have ever used.

Does it involve writing? Yes.
Do you have to know exactly what you want? No.

In fact, I have found that now I am able to live and create in the moment instead of focusing on some general year long goal. When a thought comes to my mind, I apply the 3 steps and work from there. Talk about a time-saver.

Some things I was able to create in 2016 because of LifeStory Transformation:

50 people went to Kenya, Africa with me on humanitarian expeditions
12 families received Business Boxes in Kenya
I hosted two successful fundraising events and both sold out
I released 12 lbs
I was in a music video with Alex Boye (and so were a bunch of my friends!)
I hosted a concert in Kenya with 6 of the biggest performers in the country

The biggest changes took place internally, however. I experienced so much more gratitude and so many more miracles than I could have possibly imagined.

Becky Rogers, who considers herself the steward of LifeStory Transformation, is one of my closest friends. We have worked together on various aspects of our lives for the past year and a half. No matter what, at some point in every conversation we have, she says, "WE HAVEN'T SEEN ANYTHING, YET!"